The view from my seat in Marsa Matruh. 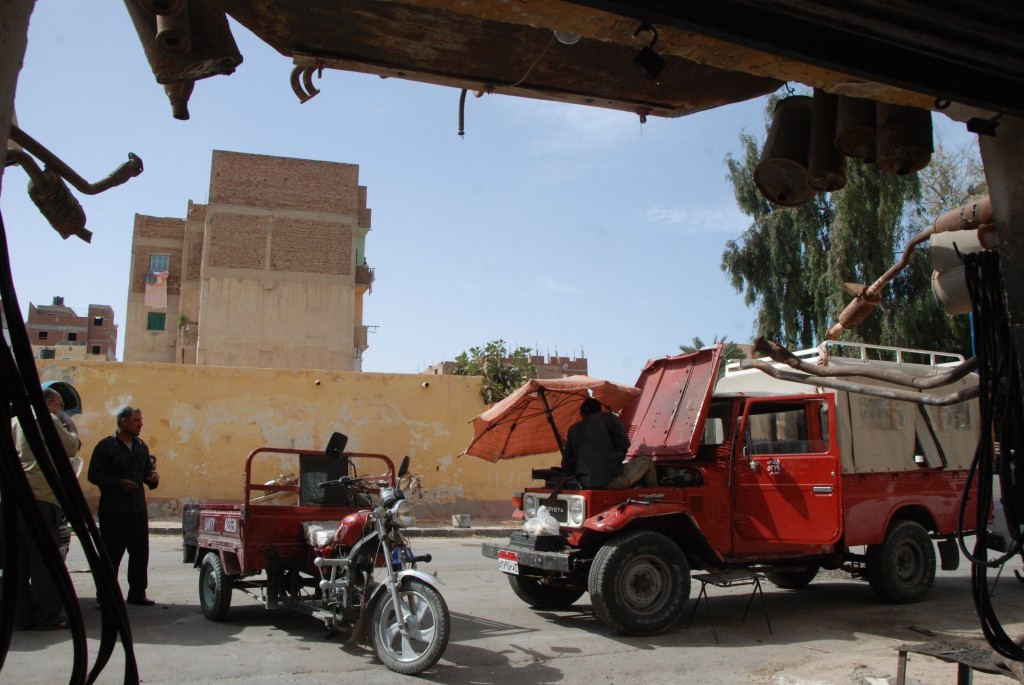 I’m sitting where so much of my book and diary’s have been written over the last six years. Each time the chair, if you can call it a chair, is different. Normally the seat has died and now in its reincarnated state; with new pieces of wood, steel or plastic added to the original design, often with no logic behind it at all. At leasts it’s solid this time which is comforting as I am inches away from the mechanics pit where oil and BIC pens enter, never to be seen again.

In the UK you pay your mortgage, or your rent, or your over 55 and lucky in the fact that you won’t have to do this for the rest or your life. In Egypt, doing stuff like that never crosses your mind. When we close our house down for the summer the biggest cost we incur is a new battery for the solar panel every few years and maybe a new key due to someone (me) leaving theirs in Romania.

In our little desert town of Siwa, it’s not mortgages that are a way of life,it’s… keeping your Cruiser running in the desert; get a stamp on a document, it’s… you just do it, no matter how long it takes.

I arrived in Marsa Matruh three days ago. I brought my Cruiser to the exhaust guy and told him what the problem was. He assured me it would be done that night, for sure, np.

The next day I got up at 6.00am and travelled with my accountant to Alexandria, 400kms down the coast. We arrived around 9.30am and started the paper pushing, tea buying process of trying to get – something done. Today it was to get the final stamp on our company we are setting up that has taken six months of ‘tomorrow it will be finished’.
“You have to sign” was the accountants reasoning for me having make the 1240km round trip.

(The cable for the welding arc has just gone under my seat and is touching the metal. If this is the last thing I write, so be it)

After six hours of sitting around and smiling and telling people my address in the UK was blah blah , even though I told them in the same breath I don’t live there and moving from one office to another, the final crunch came after 20 ‘inshala everything will be OK’ s.

“You can’t sign” said the accountant, “you mus have certified translator from Consulate.” Like suddenly every one new that, it was just so obvious.
“Great, they shut in 5 minutes.”
“It’s no problem, I have power of attorney for you, I can sign, it will be finished… tommorow.” said the accountant, like it was a rabbit he had just pulled out of hat.
“You can sign… so, I didn’t need to come here; great”

Penny travelled up with me and we went off to meet the new Consul General in Alexandria. We showed her the Spitfire Bar and went on to the Greek Club for dinner. We discussed some problems Brits have in Siwa and formulated a plan of action to deal with them. The conversation moved away from work and the Consul took out an astronomy magazine and suggested we do astronomy tours.
“We plan to do something like this and mix in metor hunting during the day” I told her.
“Metors, were do you find them?” she asked
I explained how how a shooting star is a small flec of stone between 1mm and 3 mm’s big and how they zap into the earth atmosphere no less than 130kms from where you see it. “A metor is something much bigger” I explained “When they hit the atmosphere they are called fireballs and and they break up on in pact” I swear, ask her, ask Penny, the first one I have seen in my life appeared out over the bay from the light house over Alexandria. It was huge, it was slow, it looked like a plane crashing or a CIA project going to plan just as the books had described.
“There, just like that one” I said calmly and pointed out over the bay, a few other heads turning in the restaurant but we were all WOUUUUUWWWWWWWWWWWW and WOWW! Power of attraction or a huge coincidence.

The next day Penny said she didn’t really need to go to Carfour, but as I will now be away for two months I persuaded her that it was a good idea to stock up whilst in town. Carfour is our nearest super market, all 620kms away.
After a hour I was feeling unusual couldn’t take any more. I went to find somewhere to put my head down. I suddenly got the ‘I need a shit, right now’ but was lucky enough to be just passing the cleanest public toilets on the north med coast in Egypt at the time, just past the checkout. Penny was not so lucky and tried to hold on till she finished her shopping, eventually she did a sprint for the loo and had to have two staff spend 20 minutes helping her find her two trolleys after she had recovered. She had no idea were she, just left them in ile something and made a run for it. What is it with going to smart restaurants and food posing? People say only I can do things like that. Just for the record I have never left a supermarket mid shop to have a shit… ever. Penny is the only person I know who has ever done that, but somehow she gets away with it.

Finally on returning to Marsa Matruh, I come to the exhaust guys this morning expecting to see a shiny new gasket on the engine and the thing running like a V8.
“Ah, Hawaga” (foreigner in Arabic, imaging getting away with calling black people and Poles in England ‘hey immigrant’).
“Yes, all done?” I ask ever hopeful
“No, problem, we need to retap your bolt holes on the engine” ( this took about 20 minutes to translate)
“So why didn’t you do it?”
Blank looks
“I said call me”
Blanker look
“You called me last night and said it was done!”
Just more blank looks and a reply of “You want some tea?”
There is one way to get your Cruiser fixed in this country, like the stamp on the doc, and that’s sit and watch it happen in front of you like a fisherman on your reborn stool, ready to pounce at any time if another car appears with a more pressing or interesting problem or if they just get bored, or; as in my case this time, someone just needed to ring the tappet guy. It took 5 frigging minutes for him to re tap the bolt hole and so now off we go rebuilding the exhaust hours, bolt by bolt by cup of tea. I have just realised I have been concentrating on writing this blog. I have just looked up and, there all working on the three wheeler in the picture. Time to pull on the line. See you soon.

PS. They finished 2 hours later. I moved on and found the guy in town who can repair the canvas roof on the Cruiser, he said he can finish it by 5.00pm tonight np… I feel a long night coming on.

PrevPreviousA Tourist in Sharm El Sheik
Next5 houses in 4 monthsNext